Murder on a Two Lane Road

Adult-content rating: This book contains content considered unsuitable for young readers 17 and under, and which may be offensive to some readers of all ages.

I woke up with my face buried in a purple silk pillow that smelled of rum, sex and some floral perfume. Small wispy snores came from somewhere near my right ear.

I carefully rolled over, as the confusion in my morning head began to clear.

I don’t usually get to fuck or even sleep on matching purple sheets.

Stormy was next to me, on her back with her large, perfectly symmetrical, after-market tits rising and falling gently as she slept, and while I’m not a big fan of large implanted breasts, if you are in Stormy’s line of work, they up your earnings considerably.

Last night was pretty much back in my memory bank by now, everything but Stormy’s real name. So I slipped out of the king-sized bed and caught my foot in my leather jacket on the floor next to the bed. There was a check for five hundred bucks from Amanda Smith, aka Stormy, in the pocket.
“Thank you, Stormy.”

Dressing quickly because I could shower and shave later in my own sleazy motel unit up north, I returned to Stormy’s side of the bed and looked down on her. With or without the new tits, she’s a treat to look at, whether sleeping with her mouth a little open or swinging around a pole with her ankle by her ear…“Come to the club tonight,” she said. “It’s amateur night. We’ll have a giggle watching the new fish.”

Amanda waved and spread her legs, giving me a grin and a little burlesque hump.

“You have no shame. I like that in a girl. I might see you later,” I said.

Amanda lived in a fine old apartment house near Broadway on Capitol Hill, so I had to park Rooby, my red Buick convertible and constant companion, a couple of blocks away.Since I was in this part of town, and was generally unable to resist temptation, I stopped for breakfast at Dick’s Deluxe Hamburger Stand and then went to the bank next door and deposited Amanda’s check, hoping that would stop the whimpering coming from my bank account.

Amanda had not paid me $500 for being a stud muffin. That part was a bonus for getting some photos of her soon-to-be-divorced dentist (The Prick) husband in some explicit sexual hanky-panky with a very sexy Eurasian dancer whom I had set him up with… 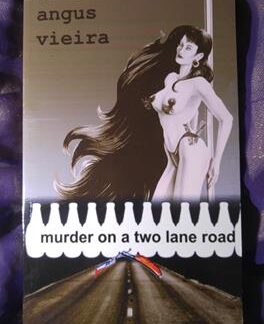